Looking back, I must say that this has to be one of the most wonderful trips of my life. Not because of the destination or the journey but the sheer impulse of the trip and the randomness at every step.

This was way back in summer of 97. My second year during MBA classes in Noida(next to New Delhi). We had just completed classes and it was the beginning of a weekend.Friday late evening, lazing in the football field, chatting up some classmates and general time pass.

We were all hostelers, so to kill the time some decided to play the game “Antakshri”. A popular “rhyme and sing”game of those times.(maybe now too).

My friend, Romani as usual struck bored with the idea of singing and usually the adventurous one picked a novel idea. Hey, why don’t we go for a bike trip? He was the one always dreaming and talking about that one Leh – Ladakh – Bullet Road Trip. Thinking it to be one of the usual brags.We let it pass. Suddenly even Anurag caught the fancy and added, Yes why not. Let’s go. Romani asked Saurav (our “swami” then). He too nodded in agreement and then Romani looked at me.. I was like what..where..how??

Suddenly al stopped playing the game, thinking what are these guys talking about, curiously looking at us.For God’s sake,guys, it’s just starting for the weekend, it was almost 9:00pm Friday night,Who the hell talks about road Trips now.

But by now the animal in us had awakened 🙂 Romani was asking few girls to join Lets go to Jaipur or Shimla or even Leh.( lol..) 😊 For Romani nothing is impossible, even thought  he was addressing some decent young ladies and some nice boys.To him all it takes is a simple nod.

Obviously, mostly backed out not even giving it a thought.I dint have a bike myself,then. so I stayed calm. Romani made the plans in a jiffy. He said he had a road map of India, we should all go back to our rooms, get some clothes, some cash, loads of attitude, bit of luck. And go to JNU ( Jawarhal Lal University) to plan our trip in between chai and ciggie.

And so off we were, not sure where ..but somewhere..We left Amity Business School,  Sector 44 Noida around 10:30 pm that Friday night.

So, quickly the 4 of us and two bikes. Romani’s Hero Honda splendour and Anurag’s 7-year-old Kawasaki Bajaj. I and Anurag sat in his bike and Romani and Saurav in Romani bike. But just as we started out, Anurag was like. Hey, I am not driving. Maths, tu chala.  (you drive)..hmm.

We rode off past our college ground, waving off to the friends still playing Antakshri., They shouted back, ok ok…watch a movie and come back soon in few hours..we know it.

But we did not stop, we reached JNU,actually a very stupid decision as it was opposite part of the city of Delhi. Nevertheless around 11:30 or so we had somewhat of a plan.Shimla,By Bike.With the road map opened wide in front of us.We started. 🙂

Yes SHIMLA. It was much closer to around 400 odd kms, but rains, bad roads, landslides.we blissfully avoided such thoughts and the adventure overtook us.Shimla here we come.

By now, it was touching midnight, but the four of us riding out of Delhi which itself was a task as we had to crossover south campus to north and hit the outer ring road to touch NH1 which connected Delhi to Amritsar through Sonipat, Panipat, Ambala,Kalka then Shimla.

We hit NH1 at 1:00pm in the night. As the adrenalin was high we rode and rode as much as we could , overtaking the highway buses..pollution,high beans etc..crossing the towns, whic looked like ghost towns in the dark.We took turns in leading the way, sometimes it was Romani and Saurav and at times it was Me and Anurag.

We touched Panipat at the break of dawn and it was lovely to be on the open highways with green paddy fields,open land at our sides and the sun breaking its way through the darkness amidst chirping of the birds. The whole night riding was tiring but we really enjoyed the morning break, at a roadside Dhaba for Chai..cleaned and washed in a nearby tubewell water.We dint want to stop for long as we had miles to go before we sleep, literally.

Amidst all this as we were reaching himachal, we now had to deal with one more natural phenomenon which we had prepared for, Heavy Rains. Nevertheless, we kept riding getting wet and drying up on the way.

Finally, around 4:000pm we touched very cool parts of the country,It was Kalka,Himachal Peadeesh.We stopped because our bikes were groaning and so were we.But at Kalka we just could not go any further. We were at the foothills of the Himalayas and it was awesome for me to have riden till here.

16 hours back we were happily playing antakshri in Noida Campus and now, here we were staring at the Himalayas. Kalka is an awesome small town very much like the movies and the view from there to Shimla is breath-taking. The narrow-gauge Railway lines were also very reminiscent of the Rajesh Khanna Sharmila Tagore Movies.

The beauty of the place took us over and then of course Romani got an idea. He said we needed a camera Those days we had no mobile forget about mobile cameras. We also did not carry so much cash. So, we decided to Rent a Camera by paying some deposit money. We collected around 800 bucks and got a kodak click camera. And took the early photos in Kalka…which is publised here…

Soon we started on our uphill ride towards Shimla. It was afternoon around 3:00pm and it was getting cold. The rains also made us think twice about the hilly terrain next 100 kms that we had to cover. But the excitement of riding in hills was just too much and so we started off.Though there was Rains but thankfully no Landslides.We stopped frequently to look down upon the gorge at 5000 ft above sea level. It was sheer excitement. Here,I must write about one incident here.

Romani and Saurav in their bike were riding in front of us. It was a while that they were not in our company. I and Anurag were chatting and slowly riding up the steep roads when suddenly ahead of us almost 50 metres ahead at the edge of the ravine we found the hero Honda lying down with engine running and wheels still moving. But there was no sight of both Romani and Saurav, I immediately panicked. I last remembered Romani revving up the engine and speed uphill. and now this. Sight. It was shocking.

I immediately pulled up, both Anurag and Myself rushed over to the edge. The valley was steep from there but no sign of both these guys. I was shocked and so was Anurag, when suddenly from the opposite side pf the road they emerged laughing and shouting .he he he. For a moment I was really praying and heaved a sigh of relief. Trust Romani to play a prank like this. After that I was more careful to Romani’s pranks. We laughed and stopped for photo there. (below one)

As we were making uphill the mist was getting denser and since it was raining …we reached a point when visibility became absolutely zero There was heavy mist and fearing the worst we actually stopped as we could not see anything only hear some car horns bus engines but visibility was zero.
And here I must write about another incident that happened.

While we had stopped our bikes and wowed at the spectacle at 5000 ft above ground in the middle of rain mist and narrow stretches of Road, exicited we spoke among ourselves about the scenery and how a chilled bottle of beer would really be fun at this moment. Hardly did we say this, a white Maruti car with Chandigarh number plate passed slowly and stopped near us…since it was almost invisible, they honked till we came there. A bunch of young folks were inside the car. Seeing us wet, our bikes and our excitement.They asked us where were we from.WE told them we were students from ABS,Noida  and lo and behold they pulled out a bottle of beer and handed it to us and said enjoy. and drove away.:) I swear to God, this happened..(pic below)

Amidst all this, we finally made it to Shimla around 4:00pm. Beautiful Shimla. I think the rains made it look ever so wonderful and even more romantic. We were super excited having made it till here.Suddenly out of nowhere a cop pulled us up.
Asked for license etc, seeing us in the condition he surely must have thought that we were robbers and stealing these 2 bikes between us. But no, he told us we had jumped a Red light signal.:)
OMG, all the way from Delhi riding almost 20 hours and now getting pulled by cop for breaking a red light signal, which was not even visible.
We sulked, paid and and moved on.

We finally found a home stay and booked a room. We ordered some food and said we will take some rest before we go and explore the city. It was Saturday 5:00pm. We had left Noida Friday 10:00pm. Food we had, but when we started the short nap. We slept, we slept and we slept. We got up the next day ie, Sunday at 11:00am. :).

Daunting upon us that we were actually in Shimla, not in our Campus Beds.Reality yet to sink in..But the joy of the pursuit was so fulfilling.WE then freshened up and decided that we had done our journey, what else to do but go back to class on Monday, next Day . 🙂 So  we quickly checked out, had lunch and started back our journey to Noida. Yes. We did..and reached Noida around Sunday Midnight.

so there it is…the Friday Night impulsive ride to Shimla and back for monday morning class at 11:00am. with a lifetime of memories within us. 🙂

Looking back, I really feel. Those were the best days of my life :)Summer of 97. 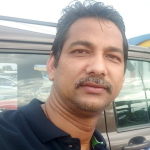 To Travel is to Live.To Help people find employment is to Live with Purpose.
#tryroadtrips #HPSC